Impressions as a Measurement Metric 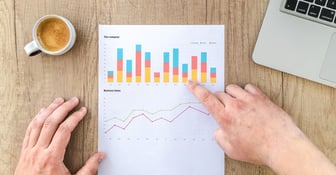 The broadcast industry has been steadily moving toward using impressions as a measurement metric over the past couple of years, but it’s not doing so without some growing pains. Ratings are hard to let go of- they’ve been used as the default standard for decades. It’s only natural that broadcast sales staff are overwhelmed and struggling to adapt to the new systems. When you’re suddenly asked to change something so fundamental to the way that you’ve been working your entire career, it’s hard to shift gears. We at ShareBuilders have felt some of the same trepidation in trying to adapt to this new normal, so we thought we’d share some of the things we’ve learned along the way.

Why is this Necessary?

The industry is changing. Ratings are based specifically on a universe of TV or radio households. They have existed in their own silo-ed spaces for decades, and it’s always been a challenge for buyers to accurately discern their ROI for broadcast advertising relative to other forms of media. It’s important to note that the way impressions are calculated does vary somewhat by different types of media, but it’s the closest the media industry has ever come to having a universal measurement currency. Think of it as, well, actual currency. Europe once used a multitude of different financial currencies across different countries, which led to a lot of complicated exchange rates, particularly for people living in border regions. The Euro standardized much of the currency across the continent which greatly simplified financial transactions. A Euro in France is worth the same as a Euro in Germany or a Euro in Italy. The Impressions metric may not be quite as clean-cut as the Euro, but it’s the closest all the different facets of the media industry have ever come to being on the same page.

What Are the Benefits of Using Impressions?

First off, you probably don’t have much of a choice. Yes, ratings are a legacy system and can still be used for all sorts of planning and research purposes. However, more and more agencies have migrated to impressions, and stubbornly clinging to ratings will only alienate your buyers. Luckily, there are some potential benefits for broadcast outlets. The granular level of detail in the impressions data can reveal hidden audiences. Yes, impressions can be large, unwieldy numbers, but they’re also very precise. Traditional ratings calculations include a lot of rounding and margins of error. When your rounding criteria is a tenth of a point, areas of low viewership look worthless. A program with a 0.0 rating doesn’t mean that it has no audience, it simply means that the audience was small and that its viewers were sacrificed to arbitrary rounding criteria. If that program were viewed not as a hashmark but as 386 individual humans potentially interacting with an ad? You’ve just created an audience out of thin air. A program or time period with no discernable value in a ratings universe is suddenly worth a little something. All those little somethings can add up to big dollars.

In addition to uncovering hidden audiences, the use of impressions should make integrated marketing proposals and sales packaging a whole lot easier. Finally, your stations’ digital offerings are using the same metrics as the over-the-air spots. These proposals will be cleaner, easier to digest, and more appealing to clients who aren’t interested in the nuances of converting currencies.

What Are The Potential Pitfalls?

Remember your value! The math when switching from ratings to impressions will feel counterintuitive. Under the current system, large markets typically have a higher cost-per-rating-point than smaller markets. In a CPM (cost per thousand impressions) world, however, the opposite will be true. The CPM would be higher in small markets. Why? Ratings are based on a percentage, meaning that no matter how large the market is, the ratings will always be calculated as portions of one hundred percent. Ten percent of the viewership in Dallas is a whole lot more people than ten percent of the viewership in Bozeman. Therefore, a ratings point in a large market will typically have a higher dollar value than one in a small market.

When it comes to impressions, the artificial forcing of the universe into 100% falls away. Impressions aren’t constrained by mathematics and are free to be a clunky, unrounded mess. In an instance like this, supply/demand theory comes into play.  The dollar volume will be spread among many more Impressions in a large market leading to a lower CPM than in a market with fewer overall impressions. This doesn’t mean the relative value of the programming has changed, it simply means we’ve changed the way we’re looking at our data.

Your sales staff needs to be prepared and savvy. While the metrics have changed, the same overall principles hold true.  “An impression is an impression is an impression” may be a useful philosophy for comparing an ad campaign’s ROI across media platforms, but it’s not necessarily true of your inventory. Just as CPP always varied by daypart, CPM will as well. Remember, impressions aren’t new. They’ve always been a piece of the puzzle. Your sales process does not need to suffer because of this shift, and they should not be intimidated into accepting artificially low rates. All you’ve done is changed your perspective. Instead of looking at a percentage view of the market, you’re looking at a granular one. Shifting from ratings to impressions is a gentle wave disguised as a Tsunami. It may feel unsettling, but don’t let it derail you. You’ve got this.

Knowing that our clients are embracing impressions data, so is ShareBuilders. We now have the ability to store and enter impressions for your station. If you're interested in making the switch from ratings, please speak with your consultant. They will work with our analyst team to schedule your conversion.