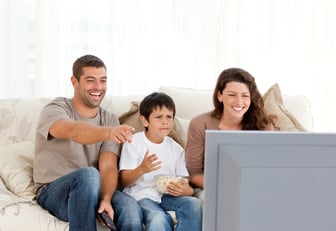 appy World Television Day! In 1996, the United Nations held the first World Television Forum and subsequently proclaimed November 21 World Television Day. While we marvel at the beauty of our giant flat screens from a purely technological perspective, the holiday is more about what the medium represents. Television has proven itself to be a major tool in influencing public opinion and disseminating information; world politics have been indelibly marked by the rise of television. Since we already wrote a blog post celebrating World Radio Day, we wanted to make sure we didn’t leave out our favorite visual medium! Let’s take a closer look at the origins of the television industry, shall we?

Over the years the television has continued to evolve and innovate. While television no longer enjoys the dominance it once did, TV ads consistently bring advertisers some of the highest ROIs in mass media. We’d like to wish all our hard working and dedicated television clients a happy and prosperous World Television Day!